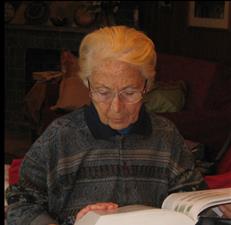 Cornelia Guja - (b. Mihalachi, 1939, Mihaileni, , ) is Titular member of the of , scientific advisor at “Fr. Rainer” Anthropological Research Institute of the , , and Ph.D supervisor in the field of medical sciences. She activated as a senior scientific researcher at “Fr. I. Rainer” Anthropological Research Institute of the (1972-2009).
Education and professional training: She graduated high school at Câmpulung Muscel in 1956, Faculty of Physics and Mathematics at the in 1961 and Faculty of Biology in 1972. In 1981 she received a PhD in Biology under the supervision of Professor St. Milcu, member of the with specialization in endocrinology and anthropology. Cornelia Guja activated as an assistant lecturer at ‘N.Bălcescu’ Agronomic Institute in , Physics Department, until 1973 when she transferred to the Anthropological Research Centre in , today “Francisc Rainer” Anthropological Research Institute of the . During the period 1998-2006 she was associated professor at the Ecological University of Bucharest and since 2003 she has been a PhD supervisor in the field of medical sciences.
She initiated and developed theories in the following fields: ‘Integronics”, ‘Interface Theory’, ‘Information Sciences”, which she presented at various international manifestations, some of the aspects having already been taken over and applied. She is the author or co-author of over 190 works published in books, specialized journals or in the volumes of various national and international congresses.

Original Achievements:
She initiated biophysical and electro-physiological researches, especially electrography and medical anthropology, and organized a specific laboratory, developing a new field of Individual’s Anthropology.
She carried out research of medical anthropology, approaching palmo-plantar electrography from an original angle and establishing criteria for informational diagnosis while working with people in emergency situations at the University Hospital in Bucharest during the period 1994-1999.
She is the creator of the laboratory of biophysics, physiology and electrography where she applied, extended and adapted the electronographic method and introduced electrographic typology and diagnosis in anthropological research, she developed the ‘Integronic Theory’ (1977…) and ‘The Interface Theory’ (1987...) based on personal experiments and interdisciplinary studies of the halo of various bodies at their interface.
She initiated and developed the fields of Anthropological Electrography, Individual’s Anthropology, Interfaces theory, Informational Anthropology, Anthropological Biocosmology, Biocosmological Informational and Individual’s anthropology.

Social activity: She delivered conferences for science popularization purposes at houses of culture, and students’ clubs; collaborated at radio and TV programs on various themes on anthropology and haloes of bodies, information, on electrographic investigations as method of medical diagnosis; she started and contributed to the drafting and editing of “The Human Being” journal.